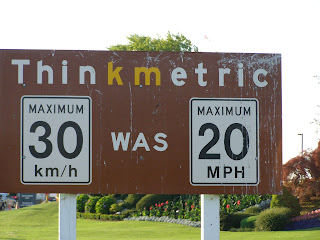 On our recent trip to the midwest, my American wife and I noticed that "Support Our Troops" bumper magnets and lawn "ornaments" were almost as abundant as American flags. Instead of flags, Canadians are content with a little Maple Leaf in McDonald's golden arches. In Canada, we know what country we are in by the plethora of Tim Horton's and km/h signs.

No matter what your position on the "War with Iraq", you can display a "Support Our Troops" magnet on your bumper. If you are against the War, to support our troops is to bring them home. If you believe in the War on Terror, then to support our troops is to increase their funding and increase troops in Iraq. Even the magnetic nature of this bumper propaganda is suggestive of a lack of commitment, nothing dates your opinion like a sticker (Bush/Cheney '04).

The problem with "Support Our Troops" is that it gives people the illusion that they are actually making a statement. For a people that came up with catchy phrases like "Make love, not war.", "Fight Crime. Shoot Back." not to mention the Darwin Fish. Really, "Support Our Troops" seems far too polite, maybe even a little Canadian.
Posted by Unknown at 7:49 AM No comments:

A quick Google search from the truth.

I served a customer the other day who was looking for books by Chuck Missler. We do not stock his books. So, he asked if I would special order one his books. "If you would like," I said.
Now, having special ordered a book by this author in the past, I knew that I could not recommend him to my customer. I asked the customer if he knew that Missler was writing books about aliens in our Bibles. The customer responded that I must have the wrong Chuck Missler because his other books are, "Right on."
I pulled up Missler's website and showed the customer. He remained where he was (in denial). The customer placed his special order and later came back to buy his book. The logic behind his decision to go ahead and buy Missler's book was that he is a very popular Christian author.
The customer I served earlier also dismissed his wackier ideas because he is a popular author whom she had heard recommended on the radio.
So, popularity and media recommendations are assurances of Christian orthodoxy.
Anyway, we sold them their books.
Posted by Unknown at 11:14 AM No comments:

New Jerusalem or the Borg?

When the Star Trek: First Contact was in theatres, my friends at Regent College noticed the similarity between the design of the Borg ship and the shape of the New Jerusalem. We came up with our own Christian Borg slogan, "Resistance is futile. You will be resurrected."
We laughed but maybe we were not so far off. For a quick Google search will reveal that indeed there are aliens in our Bibles. You simply have to read the Bible with the correct interpretive lens. Thanks to Orson Welles' 1938 presentation of War of the Worlds, alien invasion was injected deep into the American psyche. In the Cold War World, the myth of the Little Green Men spread. As reports of sightings, abductions and other close encounters proliferate, the myth has taken a strong foothold in our cultural imagination. From these reports, we now know that these Visitors are not Green but Grey. The verdict is still out whether these Visitors are benevolent or more like us.
So, how do I find them in my Bible? Well, once you believe the reports and have an encyclopaedic view of scripture, then getting the aliens into the Bible is a simple matter. Any being that tries to teach or communicate a message to the human race from "the heavens" that doesn't specifically point to Jesus Christ is a demon, especially, if they promise world peace. Hocus Pocus! Aliens are really demons. Tada!
One of the arguments I have read is that only demons would have the technology that aliens seem to possess. Well, if aliens are demons. Then what is God. Is the New Jerusalem which comes down from the heavens, a huge cubical alien spacecraft. Or is someone misreading their Bible with a wacky hermeneutic.
The Fundamentalist and Dispensationalist approaches to scripture tend to import current culture into the Bible and then these beliefs come out as the inspired, infallible word of God. That is, if we read aliens into the Bible, then the Bible affirms the existence of "little grey men" and who are we as Christians to argue with God. There is no room left to say, perhaps these are demonic or psychological experiences but aliens are not visiting the earth.
The irony is that this approach to scripture often ends up supporting the worldviews which evoked the reaction.